← Balance? No problem.
My Morning Commute →

A Supervillain Is Born 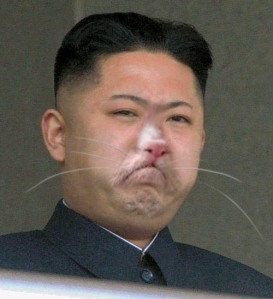 He’s not impressed with your sanctions.

Fortunately for the world, other visiting dignitaries Chris Hardwick and North Korean’s favorite basketball player Dennis Rodman were thrown clear of the radioactive cloud due to the selfless act of Wil Wheaton.

Mr. Weaton and fellow celebrity Hannah Hart were not as lucky and were found at the center of the blast zone fused into the pop culture cabal that wishes to be known as Hanton Wilhart.

At least it’s a mirthful monstrosity.

Fortunately Mr. Hardwick has managed to work the deal to his benefit, signing the affront to God’s glory as a single entity for a 50% savings to Nerdist Industries.

“We’re very excited about this merger,” Mr. Hardwick was quoted as saying outside Decontamination Center 3 in the capitol city of Pyongyang, “fusing the plucky drunken energy of Harto & Co. with the industry smarts and old-school nerdery of Gordie Lachance from Stand By Me is a perfect match.  I see this as the greatest melding of male and female energies since Edwina Cutwater took over the right side of attorney Roger Cobb’s body following a botched Hindu soul transfer.”

MrMiss. Wilhart was unavailable for comment, but a visit to Nerdist industry’s website has updated their splash page to read, “Coming in April: My Drunk Tabletop featuring Felicia Day, Gordon Ramsay, Morgan Freeman, and your host, the abominable Hanton Wilhart.

Grumpy Kim was quoted as being not impressed.

Posted on March 14, 2013, in America, Foreigners and Their Affairs, INTERNETS!!!!!, pop culture, ScienceWerks. Bookmark the permalink. Leave a comment.

← Balance? No problem.
My Morning Commute →