← VSH-PSA: Parking Brake
The Multiverse and How It Relates To Top Gun →

Another shooting.  Another hate crime.  Another day of watching popular blogs push up their click-through traffic with a photo of an odd-looking man-child on their front page.  Glamorizing the words Spree Killer!  Racist!  Murderer!  Another day of watching my facebook wall explode into a digital lynch mob.  Watching fingers pointed at one another, at society, at the law.  Watching people repost imperfect analogies to rage/shame support to their belief.  I watch the world fall apart in anger, rage, and misery.  I watch the name and face of a man-child become burned into my laptop screen simply because there is no way to escape his face, his name, his instant celebrity.

I’m going to introduce you to a man whose story changed my thoughts on how we process grief, Hector Black.

I was fortunate enough to see Mr. Black perform this story at a Moth event at UCLA, and how he forgave the man who murdered his adopted daughter.

He expresses, with a voice thinned by age and and years of struggle, what forgiveness means or CAN mean to a person forgiven.  And more importantly, to the person who grants forgiveness.  I felt that those years of struggle on stage with Mr. Black through his retelling of his story, and I saw that same struggle today in the eyes of families who had just needlessly lost those closest to them.

I’m not posting this as an analogue to the events splashed across the media, both popular and underground, I’m posting it as a thought experiment about how we CAN behave in the wake of tragedy.  Perhaps as an alternative to the digital lynch mob that has occupied our collective consciousness since the dawn of social media.

Hector illuminates how the unseen fingers of emotional debt can strangle those who have been wronged, choking the spark of life from the eyes of the living for the rest of their days.  He also illustrates beautifully how difficult forgiveness can be to understand, even to the person granting it, and how forgiving is never synonymous with forgetting.

Unfortunately the performance I witnessed, one that had all eighteen hundred seats Royce Hall at UCLA breathlessly silent for nearly twenty minutes, is not available.  So I’m posting two other retellings of his tale.  I’m posting two, because each has elements of the story he told to us.  To me. Different Moth Event, and RadioLab Interview.

I highly recommend you listen to them both.

In all of his harrowing tale, one line always sticks out for me, and I’m trying my damnedest to hold it close to both my heart and my head.  “When you hate, you drink poison and expect the other person to die.”

I don’t know that I could ever have Hector’s compassion in the same situation, and I certainly don’t ever want to find out. But knowing that there are men and women alive like Hector and the families I saw today gives me hope for myself, and for each of us, the righteous and villainous alike.

I wish Hector, and all families brutalized by inexcusable violence, everlasting peace. 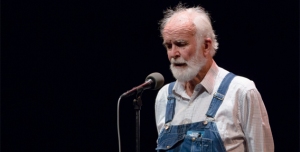 Photo by Eli Goldstein.  Used without permission.
I hope Eli forgives me.

← VSH-PSA: Parking Brake
The Multiverse and How It Relates To Top Gun →