Category Archives: Foreigners and Their Affairs

It appears the newlyweds will be in LA this weekend kvetching up traffic all along the most heavily traveled roads in LA during drive time, the weekend before the largest artery in Southern California is shut down for two days.

Yes, that is Simpson/Hemstead’s official stance.

Posted in America, Foreigners and Their Affairs, Nixonian Enemies List

Taking Out The Trash

WTF is with the prices of trash cans?  Simpson/Hemstead was unaware that the price of trash cans had skyrocketed so much (we usually just throw trash on the floor and then once a week take a big squeegie and push it out into the yard), and we are appalled that Americans are forced to pay fancy escort prices for a place to throw out old fruit.

Some of the culprits:

And those Simple Human jackasses try to convince you that you need to buy 12 “liners”, what we undereducated call “trash bags” at roughly 1 dollar a piece.  If you’re only taking out the trash once a week (which means your house is filthy and smells like garbage all the time) you’re spending 52 bucks a year just on trash bags designed to fit these overpriced aluminum and plastic buckets.

But raising the bar on high priced stamped metal buckets are the douchenozzles at OXO.  I’ve often wondered what OXO even means while using one of their vegetable peelers that looks like it was built for a kindergarten class, and having seen the prices of a goddamned trash can I think I’ve figured it out:

OXO: It's the emoticon for your furrowed brow after looking at the price for molded plastic and aluminum.

$89 for a plastic bucket mass produced in a mold that breaks after two years, and 169 for the same thing made out of the equivalent of 48 cans of coke (which costs 28 dollars, plus you get a shit-ton of Coke).

I like the stones on these cats, but currently this company has the biggest brass cajones of them all:

Brabantia is Dutch for "Ikea is for Dickbags"

This is only a selection of some of their products, including a red metal 98 dollar bullet trash can.   Some might say, “But you’re paying for the import fees and styling.  Look at the glorious European styling!”

It’s f@cking round.  Round isn’t a style, it’s a shape.  It’s a shape some would consider funny for a balloon.  It’s a goddamned cylinder.  It’s the shape of an empty roll of toilet paper.  Pipe down with your European style crap.  As for import fees:  once again it’s a trash can.  This isn’t a luxury automobile.  What exactly are the tariffs on round lightweight metal I wonder?

No.  This unchecked trash can lunacy will end the minute you elect Simpson/Hemstead to office.  You’ve got Netflix and cell phones and Simpson/Hemstead Merch to spend this money on, not trash bags and shitty plastic cans and European Styled Roundness.

Posted in America, Foreigners and Their Affairs, Nixonian Enemies List, The Econonomy

Leon Botha, prolific D.J. who shot to fame in Die Antwoord’s “I’m A Ninja” music video (NSFW), as well as the documentary “Who Am I” passed away on June 5th, the day after his 26th birthday.  Leon wasn’t taken down by drugs, or women or hard partying; Leon was born with progeria, a genetic disorder that gives the sufferer the appearance of prematurely aging.

I’ve been reading message boards of well wishers and mourning fans who say that Leon was given a rough lot in life, but I’d disagree.  Leon, in his 26 years experienced fame, fortune, and respect for his innovation from fans and contemporaries.  He traveled the world, he performed on stage, he got to live a life that most people would only dream of living.  At 26 years old he was only one year younger than James Dean, Jimmi Hendrix, and Kurt Cobain when they died.

Even as a man living with progeria, he lived 26 years which in and of itself is an accomplishment.  The average lifespan of a person living with progeria is usually teens, occasionally the early 20’s.  Leon lived a shit-ton of life; maybe because he knew there was a clock on his life most of us don’t have ticking in our ears.  Or maybe he was just a die-hard fokken ninja who went after what he wanted and wouldn’t stop until he had it.

Rest in peace Leon, but you’ll never hear me say you got a bum hand.  You’ll hear me be jealous of how much life you lived.  You’ll hear me hope I live half the life you lived, even though I’m already 37.  Then you’ll hear me try to get off my fokken ass to start living.  We’ll keep spinning down here. We’ll keep going through the day to day. We’ll remember your work and your art far longer than any of us will be remembered after our lackluster lives.

Posted in Foreigners and Their Affairs, pop culture

I Give Up, Internet 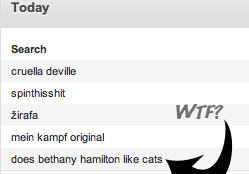 Apparently someone out there is losing sleep over this...

People WILL search the internet for absolutely everything.  I’ve given up trying to understand you, internets.  I swear if I tag this post, “How To Diaper a Llama In Cheese” someone will search for that tag.

Posted in America, Foreigners and Their Affairs

Tags: How To Diaper A Llama In Cheese, WTF?

Monkeys are not witches.

Dugongs are not mermaids.

Will Farrell is not funny anymore.

The Star Wars prequels did not “get better” as they went along.  You just became accustomed to disappointment.

In Simpson/Hemstead’s America, monkey justice would be swift and cleansing.

Posted in America, Foreigners and Their Affairs, Monkey Justice

Well, It’s Been Fun, Everybody

Since apparently tomorrow is our last day on Earth, I’ve asked our feathered concession speech writer to begin our concession speech for the end of time.  So she drank a bottle of scotch (the cheap stuff, she has to work for the good stuff) and jotted down Simpson/Hemstead’s thoughts about the end of all things.

– So, it’s come to this.  Rapture.  The day of reckoning foretold by the bible and Debbie Harry.  Despite 10 years of lobbying, internet-ing and pleading, Simpson/Hemstead has come not closer to elected office than coming in fourth in a race of three for  middle school class treasurer in Wisconsin. What do we, those who have looked the other way have to show for this?  Rapture.  But really, what is Rapture.

If you see this out your window Sunday... you're not raptured.

According to the bible, the Rapture is when Jesus returns and takes all the true Christians up to Heaven to live in his Dad’s house with he and Kirk Cameron while the rest of the universe is torturously rebuilt as the new converted basement for Jehovah’s seriously pimped out crib. This work is presumably performed by the lowest bidder using the underpaid hands of unlicensed illegal immigrant workers found at Home Depot.

Okay, sounds great for anyone who really wants to spend eternity watching the Left Behind series with Kirk Cameron giving you a running live audio commentary about how the films were made.  But what about those who ARE left behind to work on this basement?

Which brings me to my next point:  What ARE we leaving behind?  Well, bible says animals don’t have souls so I guess I’m shit out of luck.  Trees?  Screwed.  Flowers?  Burn nicely.  The Moon?  Feh, I’ve seen better. The Complete Second Season of THE FACTS OF LIFE on DVD?.  Gone.   Robert Downey Jr?  Not so fast, mister. That’s right everything in your lives that makes your experience here on this recyclable plane of existence interesting and fun gets abandoned.

What does the universe think about that?  What do the infinite number of creations, lovingly constructed over an unfathomable amount of time (read: 6500 years in biblical terms, with 1 day responsible for the majority of the heavy lifting, and 5 days of tinkering with 1 insignificantly small little blue dust speck and 1 full day left aside for Michelob Time) have to say about being abandoned by the infinite loving creator that is judging them in the most horrible and narrow-minded selection process possible?  Well, I found a website that pretty much answers that.

So there you have it, nature and creation and apparently Bill Gates have spoken.  I guess this is the part where we admit defeat, but Simpson/Hemstead isn’t about defeat.  Apathy, procrastination, and voting for our opposition (thanks Hemstead) is more our speed.  But also we’re too stupid to give up hope that the pathetic few are wrong.

In either case before the dumb Rapture could you at least order something from our online store?  It won’t get to you in time, but at least we’ll have the satisfaction of SOMEONE having bought SOMETHING from us before existence ends.

Who knows, that charitable deed might be the one thing that puts you over the top into being rescued from eternal damnation.

UPDATE:  Looks like this fine heathen has put together a handy flowchart in case you were wondering if you will or will not be Raptured, so you can decide if you need to brush up on your Growing Pains trivia.

Say Hallo To My Lillo Dinner

Cuban style?  I guess that means my dinner will settle in Culver City and tell me I don’t dance right.

Posted in America, Foreigners and Their Affairs, The Econonomy

This morning I wake up and head into the yard, bleary-eyed from a night of forget-me-quick drinking and shooting zombies, and photoshopping a site update I’ll post tonight, and I stagger into the laundry room.

I open the back door (the dryer sits outside because this house pre-dates the idea of wanting to dry something inside) and notice something on the brick, hiding in the rapidly advancing weeds.  A proud pile of brown resting in my yard, triumphantly staking it’s flag on my property.  Sadly it wasn’t a team of UPS drivers.

Extra sadly it wasn't THIS team of UPS drivers.

Nope, it looked like the dog had pooped on the brick again.  Ugh, TWICE.  Goddamned dog, first he’s barking all night long, and now he’s shitting on the bricks in the backyard instead of in the grass.  When will he/she ever learn?!

That’s when it struck me:  I don’t own a dog.  The barking hound that keeps me up at night belongs to the neighbor.  The same neighbor throwing fruit at my house last week.  Now I’ve got two healthy-sized piles of feces in my yard to contend with.  Not sure if it’s that dog or not because I’ve never seen it.  Just heard it.

Time to throw on the security cameras, check the footage.  Is it meth addict, is it fruit-chucker, or is it ghost mutt?

Sadly, sometime in the last week the security cameras stopped working, so while I’m resetting the system, and the cameras all come online, I notice something moving in the corner of camera 4…  two somethings…

I send Scott, Director of Homeland Security to investigate.

Dammit, she works for Sony… this is a potential contact.  So now, how to create a networkable connection while still getting the GD dogs quiet.  This is the greatest challenge Simpson/Hemstead has yet to overcome.

It’s not all blue supermodels and loose sexual morals…

Posted in America, Foreigners and Their Affairs, pop culture