The ScienceWerks team has spent the last 5 days researching better titles for this absolute turkey of a film that has convinced America and the foreign press that it is the second coming of the cinemascope song and dance genre.  How did it do this?  We’ll get in to that later, today the ScieneWerks just wants to present the results of their research.  Forgive the ScienceWerks, they’re not great with design and don’t seem to understand proper text stacking. 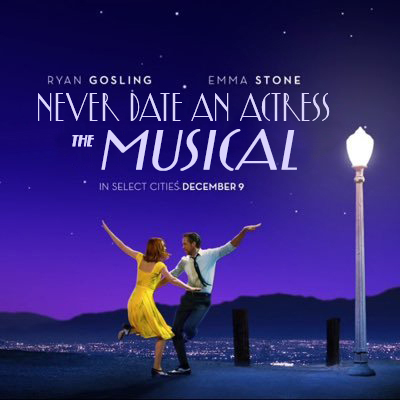 We here at Vote Simpson/Hemstead have been rather heartbroken at the loss of Carrie Fisher.  She was more than just a princess and a general, she embodied a number of concepts that we would carry with us through our formative years and into our adulthood.  She first stepped into our minds at about 3 years old.  For me personally, Star Wars is my first and strongest memory.  And like so many of my contemporaries, that is how we first came to know Carrie, but we didn’t realize the ways she would impact our lives.

She was our first crush.

She was the first strong female character we encountered in movies.

She stood fearlessly against giants, and not only held her own but often made them back down.

She was relentless and determined.

The villainous could subjugate her, but never break her.  And in the end, they’d pay.

As her character aged she became wistful, and a little reticent of some poor choices she might have made, but would not stop fighting for what she believed in.

As I got older, and became a fan of Carrie as a humorist, author, and script doctor I found that Carrie as a human being was all those same qualities I loved about her most iconic character.  It’s easy to separate Carrie and Leia, but I’ve found in preparing this that I’ve had a hard time separating what I loved most about these two icons, the fictional and real, because as I knew her, Carrie embodied what I love about Leia, and Leia was only a woman I love because of Carrie.

She will be missed.

Person on the street:  You look like you’re in your 40’s.  At this point in life is a man wearing graphic tees to work like a woman your age shopping at Forever 21?
Simpson:  I’ll have you know I wear graphic tees to work so that I can be confident that I’ve not put on my shirt inside out or backwards during my morning flurry to get ready. If I can see a cartoon, I’m ready to take on the world. They’re grown-up Garanimals.

That headline says more about the state of the union than any post a political analyst could write.

Conversations From the Western White House

The first lady and I were sitting in bed talking about virtual reality last night and the following conversation happened:

Me: Okay.  what’s the opposite of virtual reality though?

Me:  That sounds like an escort service for cosplayers.

FL:  Either way.  This is also a viable business venture.

*No word yet on whether costumed escorts will be available at this time.

Not our most popular model.

Is it pop culture profiling?

Is it pop culture profiling if I’m inherently distrustful of people in airports dressed like Travis Bickle?

A Friendly Reminder For Today

The Multiverse and How It Relates To Top Gun

Let me recount a conversation with the first lady during breakfast this morning.  Pandora was playing the hits of the 80’s and Kenny Loggin’s “Playing With the Boys” starts playing.  She looks up after about half of the song and then this conversation happens.

First Lady: I don’t know that I’ve seen Top Gun all the way through.

Vote Simpson/Hemstead: What do you mean you don’t know if you’ve seen Top Gun all the way through?

VSH: This song is kind of attached to a memorable scene for women.  It’s pretty much the scene every girl remembers from the movie.

FL: Yeah, I don’t think I’ve seen the movie all the way through.

VSH: All the way through?  That scene happens like 35 minutes into the movie. (Edit: it’s 46 minutes)

FL:  Maybe I think I’ve seen little bits of the movie maybe online or in pictures so I feel like I’ve seen it.

VSH: (vehemently) Yeah, but It’s the scene where all the pilots are shirtless and oiled up playing volleyball at the beach.

FL: (Casually) Not ringing a bell.

As someone who was raised on a strict diet of pop culture not knowing if one has seen a movie or not is something I can’t wrap my head around.  She wasn’t and is often confused by the depth of my pop culture trivia knowledge, and subsequently confused as to why I can do that, but not math.

I personally love these conversations, they are those great moments where it seems like you are living in two tangental universes that are brushing up against each other, allowing us to communicate.  https://screen.yahoo.com/census-taker-000000855.html?format=embed” target=”_blank”>This video is the best analog I have for the experience.

Anyway, we’re watching Top Gun tonight, so at least my universe will know that she’s watched it all the way through the next time her universe forgets.

Slider is ready. I hope she is.

Don’t make our mistakes. The empire you save, just might be your own.

We’re not really following this whole Washington Redskins trademark thing other than the outrage from people on our facebook walls who 1: don’t live in Washington and 2: aren’t Native Americans.  BUT, we do like any opportunity to possibly rename a sports franchise.  So we’d like to formally propose to you the perfect mascot to carry the mighty Washington team into this next evolution: 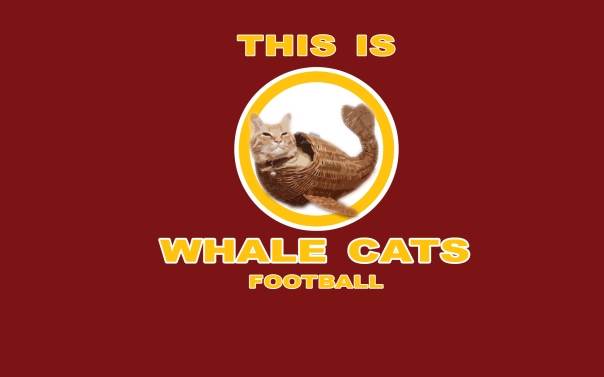 Football just got wet and furry